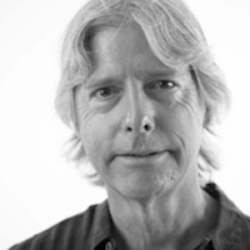 An award-winning poet, essayist, and translator, he started writing science fiction and then expanded his scope to include innovative techniques in poetry. Andrew has taught at the UC Santa Cruz and been a visiting writer at many colleges and universities. His books of poems include Force Fields (1987), Science Fiction (1992), Invisible Machines (1997), The Removes (1999), Fathom (2004), The Sound Mirror (2008), and Trance Archive: New and Selected Poems from City Lights editions in 2010.  As an editor he has seen to publication the Collected Poems of Gustaf Sobin (2011), and The Collected Poems of Philip Lamantia from University of California Press in 2013.  He has published a book of essays, The Cry at  Zero: Collected Prose with Counterpath in 2007.  He has also translated three books from the German, Literary Essays, Ernst Bloch (Stanford University Press, 1998), The Perpetual Motion Machine by Paul Scheerbart (Wakefield Press, 2011) and Of Things by Michael Donhauser, co-translated with Nick Hoff (Burning Deck, 2016). Magazine publications include Isaac Asimov's Science Fiction Magazine and Amazing Stories as well as The Nation, Hambone, and Sulfur.  In addition to teaching, Andrew has worked as a science librarian and in the publishing industry.