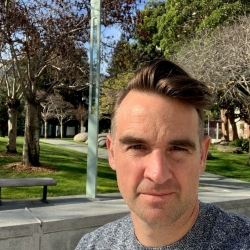 Peter Sinn Nachtrieb, 6’6”, is a San Francisco-based playwright who often writes about misfits, biology, apocalypse and people struggling against large systems.  His works include the plays boom (TCG’s most produced play 2009-10), BOB: A Life in 5 Acts, The Totalitarians, Hunter Gatherers, The Making of a Great Moment, A House Tour of the Infamous Porter Family Mansion with Tour Guide Weston Ludlow Londonderry, T.I.C. (Trenchcoat In Common),  Colorado, Litter: The True Story of the Framingham Dodecutuplets and the musical Fall Springs with composer/co-lyricist Niko Tsakalakos. His work has been seen off-Broadway and across the world including at Ars Nova, Woolly Mammoth, Seattle Rep, Actors Theatre of Louisville, Southern Rep, Barrington Stage Company, Kitchen Dog, Merrimack Repertory and in the Bay Area at  Z Space, A.C.T., Encore Theatre, Killing My Lobster, Marin Theatre Company, Impact Theatre and The Bay Area Playwrights Festival.  His plays have received numerous awards including the Will Glickman Prize, The Stavis Award, The ATCA/Steinberg New Play Award, among others. Peter is an alumna of New Dramatists and was the Mellon/HowlRound Playwright in Residence at Z Space in San Francisco 2013-18.  He holds a degree in Theater and Biology from Brown and an M.F.A. in Creative Writing from San Francisco State University. He likes to promote himself online at on his website.